The following post is from Eric Brunsell, a science education professor at UW-Oshkosh. It ran last year on his blog Teaching Science 2.0, but I felt it is worth reblogging in light of my recent posts on Towers, Lab Groupings, and Grading which make important points about my classroom environment.

Please answer the following questions in complete sentences.  Each question is worth 3 points.

1.  What is the developer’s primary focus?

2. What is the retro encabulator capable of synchronizing?

3. What is the retro encabulator successfully being used in?

4. Where is the differential girdle spring located?

5. Extra Credit: what is the only new principle involved in the retro encabulator?

Please answer the following questions in complete sentences. Each question is worth 3 points.

1. What do insects brush against to effectively cross-pollinate the flowers?

2. What do the markings and hairs on the Fox Glove flower act as?

3. Which species of plants have pollen grains smaller than those of insect pollinated flowers?

4. When the florets were growing, what was pollen transferred too?

5. Extra Credit: Which plant has evolved the “most interesting” for ensuring cross-pollination?

2. The state of matter that has a definite volume and a definite shape is _____. Hint
A. gas
B. liquid
C. plasma
D. solid

Not sure about this one? Here is the hint:
Think about where most of the matter in our solar system is located.

4. Most pressure is measured in _____. Hint
A. grams
B. kilopascals
C. newtons
D. kilograms

5. Charles’s law states that the volume of _____ increases when the temperature increases, at constant pressure. Hint
A. a solid
B. a liquid
C. a gas
D. all matter

(Inspired by a classic)

How will I use this? I am going to give the Encabulator video as a HW assignment for my students and tell them there is a quiz the next day taken from the questions. I’ll play the whole thing up, totally serious. After the quiz, I think this will generate lively discussion about learning vs. understanding and my goals for the course.

With the first day school around the corner for some of you (I don’t go back until after Labor Day), I wanted to share a neat little activity I use to get my students into groups for the first time. Like my previous post on the Marshallow Challenge, this game has several subversive layers.

It is based on an activity shared on an email list (can’t remember which) a few summers ago. In the original, each student was handed an index card with a cartoon character’s name on it. Students then got up and grouped themselves with other characters from the same movie or TV show. Cute, but too simple and obvious for high schoolers. Plus, kids could easily swap cards so they can sit with their friends.

So here’s what I did. I waited at the door and, as kids entered class, gave each one a card with a word on it. Initially, students could sit wherever they liked. On the back of the card, they had to write their name, one thing they considered themselves to be experts at, and one thing they still struggle with. (This prevented card swapping when it was time to organize into groups. Plus I get some tidbits about my students.)

I ditched the cartoon character theme and made the groupings trickier. I didn’t give them the group themes, but simply told them that they were to find 3 other similar people. In the end, there would be 6 groups of 4. They also had to introduce themselves as they looked at each other’s cards.

Here are the groupings:

When it was time for students to find their groups, the room started buzzing as they compared cards:

Subversive elements I wanted kids to experience (which we discuss after):

What are your student grouping strategies?

This post is part of the 2011 Virtual Conference on Core Values hosted by Riley Lark. The prompt for the conference is “What is at the center of your classroom?” You can see the rest of the blog entries in the conference at the Virtual Convention Center.

What is at the center of my classroom? It’s not an interactive whiteboard. It’s not an angry bird. It’s not a Sal Khan dart board. It’s a tower. A tower which represents success, failure, and risk-taking. The tower is built from uncooked spaghetti, tape, and string. It is unimpressive and crude, perhaps leaning to one side while a marshmallow rests at the top.

Surely you’ve seen this tower before. Perhaps you and/or your students have built one. It’s from The Marshmallow Challenge, a great team-building activity. Using 20 pieces of spaghetti, 1 meter of tape, 1 meter of string, and 1 marshmallow, teams try to build the tallest free-standing tower that will hold the marshmallow on top. Time is limited to 18 minutes.

Tom Wujec gave a great TED talk about the challenge. It’s only 7 minutes long, and well worth your time.

Wujec talks about collaboration, skills, and hidden assumptions. Some teachers use the challenge on the  first day of school to be different from their colleagues who lecture about syllabi and rules. For me, however, the tower lives on throughout the year and becomes a symbol for the core value at the center of my classroom.

So where does the feedback loop appear in my classroom?

The Feedback Loop in Science

Modeling Instruction is the framework for much of my instruction. A modeling cycle typically consists of two stages: Model Development and Model Deployment. During the model development stage, students are designing experiments to determine the model that governs a specific scenario (e.g., a battery-operated car moving at a constant velocity). During the deployment stage, students apply their model to other scenarios, use it to solve typical physics problems, and perform a lab practicum (e.g., predict when and where two different battery-operated cars will collide). 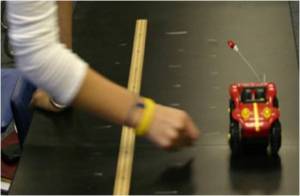 Often, the model will need to be refined. For example, here’ s how Matt Greenwolfe does the constant velocity lab:

I do the buggy lab twice.  The first time, it’s a distance vs. time lab and the resulting graph does have a zero y-intercept and its slope is speed. This is the way the students intuitively approach the lab anyway – measure distance and time.  The second time, I make sure there are issues of starting point and direction of motion and we do position vs. time and the slope is velocity –  the motivation being that this can describe more aspects of the motion than distance vs. time graphs and speed.

Sometimes the model completely fails. For example, the constant velocity model can’t help us predict the motion of ball rolling down a ramp. So we start the cycle over again and develop a new model, often seeing connections between them.

The Feedback Loop in Learning

Standards-based grading is the feedback loop while traditional grading waits until the very end to give feedback (which by that point is useless). When students track their progress, they see the feedback loop in action. Just like building the tower, all the “failures” are necessary feedback to help students succeed.  And since SBG doesn’t penalize students for those initial failures, students feel more comfortable taking risks.

Whiteboarding is another great way for students to get just-in-time feedback from you and from peers. While collaborating in small groups, students are discussing and sharing their ideas and solutions. Likewise during whole class presentations and discussions. Because whiteboards are easily erasable, students are more likely to take risks when solving problems, than using chart paper or a worksheet. For more details, see Tomas Ro’s great post Whiteboards vs. Chart Paper.

The Feedback Loop in Teaching

My classroom is a spaghetti tower itself. I am fortunate to have supportive administrators who understand the need to experiment and explore new lessons and methods. I make sure to let my students know when we are trying something new — I want them to see me as a learner, too. I frequently ask my students for their feedback. I don’t collect dashboard data, but real and useful information via concept inventories, informal questioning polls, and more formal surveys.

In the Marshmallow Challenge, the successful spaghetti towers would not be possible without continuous testing and failing. That is why success and failure must be celebrated with equal enthusiasm and that as teachers we must encourage continuous risk-taking.

Where is the feedback loop in your classroom?